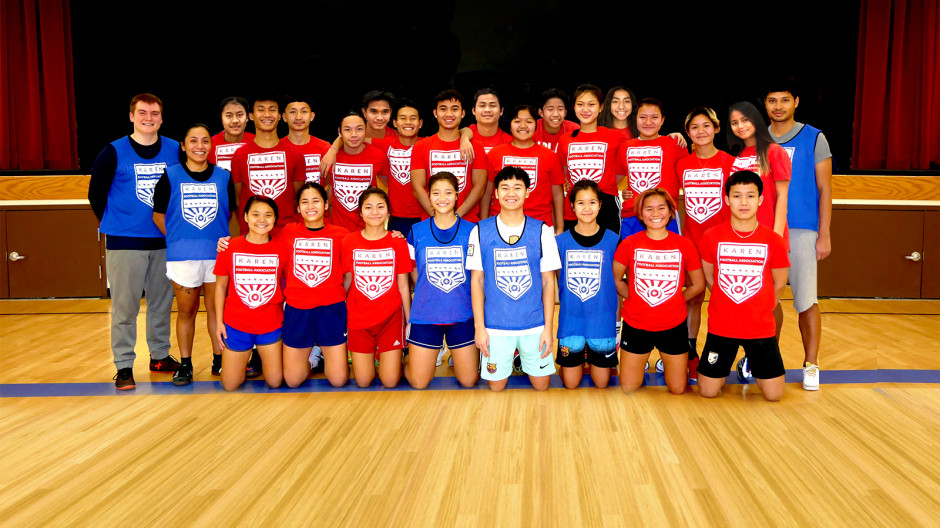 While on a trip in France many years ago, St. Paul native Kyle Johnson was in a cab having a soccer-centric conversation with the taxi driver. The driver told Johnson the United States men’s team was going to be one of the best in the world in the next five to 10 years. Johnson disagreed, but the driver had his reasoning.

“You guys have the numbers,” the driver said, pointing to the United States’ sheer size and population.

True, Johnson thought, but the country isn’t exactly taking full advantage of those numbers. Not only is the U.S. men’s team currently not the world’s best, it failed to even qualify for the last World Cup.

One of those communities — the Karen population in St. Paul — is competing on a grand stage this weekend. In the first year of Johnson’s Karen Football Association, two St. Paul teams qualified for the U.S. Youth Futsal National Championships this weekend in Kansas City.

Futsal is a fast-paced, 5-on-5 version of soccer played with a smaller, low-bounce ball played in the tight corridors of a gymnasium. Because of the small amount of room provided to operate, the sport requires a high level of technical skill.

“Since it’s a tighter space, you learn how to dribble better and learn how to control the ball more,” Million said.

Futsal, Johnson said, is where many of the game’s icons cut their teeth growing up. He has seen it have a similar effect on many of his players. Million is an example. As a senior this fall, she was an all-conference defender on a Como Park team that won the St. Paul City Conference title.

“I also saw her get tremendously better by playing a lot of futsal over the winter,” Johnson said. “We ran a ton of futsal at Como, so right away, once the season was over there, we opened the gyms and did a lot of pickup futsal. I’ve seen kids get really, really good over a short amount of time by playing futsal, and she’s one of them.”

Johnson has run futsal competitions around St. Paul for the past eight or nine years, and he always had the goal of getting the teams into more organized events. This year, the group joined the Minnesota Futsal League in Minneapolis. Those in the league pushed the teams to enter into the regional tournament, where both St. Paul teams managed to qualify for nationals.

The two teams both compete in the U-19 age division. Johnson said both teams are made up of students from Como Park, Humboldt and Washington high schools.

“This is actually the very first time this has happened, that a couple of all-Karen teams have ever participated in an event like this,” Johnson said. “They don’t typically participate in these types of organized, club events. They have their own community tournaments, which are incredible. There’s a ton of talent there, but this is an experience for them.”

Johnson’s goal is to shed a light on that talent. Roughly 7,200 Karen refugees live in Minnesota, according to the International Institute of Minnesota. St. Paul is home to the largest Karen population in the United States, yet Johnson said he is surprised by the number of people within the city alone who don’t know about this community of people.

“So it’s a big deal for these kids and the families and the community that we just can show … the United States, who the Karen people are,” Johnson said.

That these teams qualified for nationals in their first attempt shows the quality of the players in the community. Everyone, Million said, has such “good skill” and “natural talent.” And now others get to see it. Johnson noted the high level of passion for futsal and soccer alike in the Karen, Hmong and Somali communities, among other people, in the Twin Cities.

“It’s almost like a religion for these communities,” he said. “It’s a big, big deal. The sport is a really big deal. They’re out playing a lot. This is more of just having an opportunity to play kind of in a different arena.”

Those communities don’t always have the same access to the youth and club systems.

“Just because they don’t have access doesn’t mean there isn’t any talent in those communities,” Johnson said. “We need to give these kids chances, because they’re incredible athletes, and right now they’re not being seen by anyone. So now there is this opportunity for these kids to go to nationals and really enjoy the game and play the game.”

Million noted she feels some pressure to do well this weekend, but Johnson doesn’t want that to be the case. He knows if they simply enjoy the experience and play their game, they’ll be successful “because they’re all talented players.” Johnson also noted weekends like this “give us an opportunity to really grow the program.”