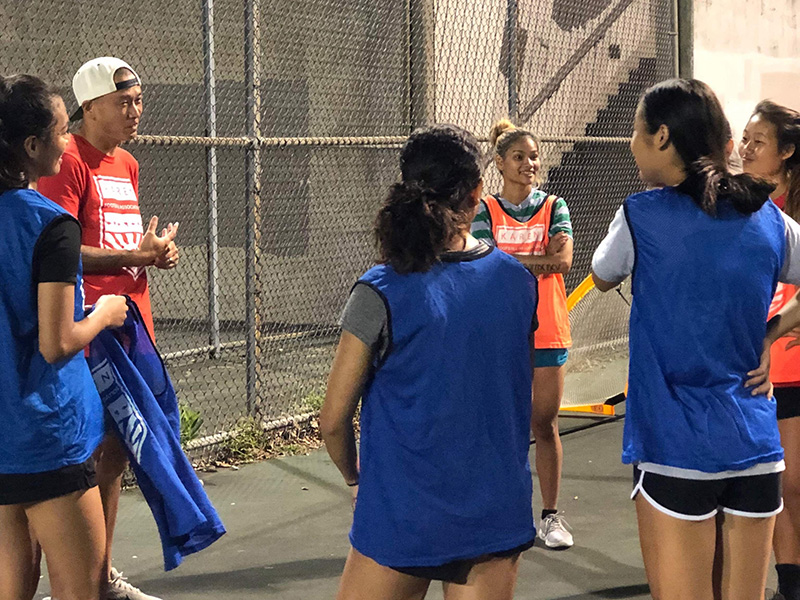 To vote for Kyle in the MLS Works Community MVP award, go to https://mlsworkscmvp.com/

Tell us a bit about yourself, Kyle – and how did you come to be involved in Karen FA?

“I grew up playing football as a little kid, maybe from the age of 4, and I played until I was about 17. I ended up quitting in my final year of high school because I was burned out. I fell out of love for the game. It was not until I had a son that I got back into the game. He was a late bloomer and started playing when he was 12. From that point on, I have been really immersed back into things again.

“After some of the bad experiences I had with the game, I wanted to make sure my son didn’t have those same experiences. We did a non-traditional form of development and I just rented gyms and invited older players I knew to play two hours of pick up futsal 4-5 times per week. I wanted to focus on fun and the technical development of play through open playing. No cones, no drills. Just playing with very high-level players while encouraging everyone to do new things.

“As my son entered high school he was fortunate enough to be a part of a very successful high school program that went to the State tournament all four years he was there, while winning it in his first year. The Como Park Soccer Program in St. Paul was one of the most under-the-radar, successful programs in the state. It is a small inner-city school with much of the team comprised of players that do not play the traditional US ‘Club’ system.

“During his four years, I noticed that there was a real lack of diversity on the women’s side of the game in high school. I knew many of the young women at his high school and they were not being represented at a high level. During my son’s junior year of high school, I made the decision to commit my futsal training to the young women in the community that did not have the same opportunities as others. Again, I opened up gyms and provided a space for them to play and have fun.

I ended up becoming the girls’ high school coach at Como Park High School. It was some of the best 3-4 years of my life, working with the athletes at the school and in the community.

Over the past 3-4 years, my focus has been on giving opportunities to young women in underserved communities by providing spaces to play, a positive environment, and support through these challenging years. I was one of the original founders of Like a Girl, an organisation that works with young women in the St. Paul area. We developed the first ever College Showcase for young women that do not have the opportunity to play in these tournaments because they are not a part of the mainstream soccer system in the US.

To this day, I am really happy with the work that I have done over these four years. I helped get a number of young women scholarships to play in college while showing them it is a possibility to play at a high level. But as I look at the bigger scope of gender equity I knew that things could be done differently. In my heart of hearts I want to create ‘generational change’ for gender equity and opportunity. I know that to do such a thing it is not women who need to be changed. It is men that need to change their beliefs, behaviors, and actions towards women.

This was how the Karen FA was formed. We have the opportunity to be a mentor to all of the young men we work with, helping shape a positive, empowering view of all women. Showing them that women belong on the same pitch that they play on. Showing them that the ‘roles’ in society need to be changed and that we can all be equals on the field of life. The young men of the Karen national team will be having families of their own in the near future. It is my hope that they raise their sons to have the utmost respect for women and raise their daughters with the belief that they can be the next Martas of the world. The young women of the Karen national team will now be given an opportunity to show generations to come, that women in refugee communities can now play on the biggest stage. They will now be viewed as legitimate athletes and not just kids playing in a park.

The second main objective of the organisation is to open doors for athletes that did not have these opportunities before. Much like the College Showcase tournaments I did with Like a Girl. I will now be able to hold similar events with both the girls and boys, men and women, in the community to give them more exposure to higher-level football.

I am excited for the future of the Karen FA. I feel like we are a unique organisation that is tackling many different issues and utilising the game of football to do so.”

How did the Karen people come to join CONIFA?

During the summer of 2018, I worked with a local organisation in the US to try and get the Tibet Women’s National Team to come to the States and play. I learned about CONIFA doing my research with this organisation. I was so excited to learn that this organisation exists and I jumped right in to form the FA.”

What are the aims of the Karen FA?

We have many goals for the Karen FA. I am really excited to show the world how much talent there is in the community. Both the women and men continue to amaze me with the their natural talents. As I have been travelling the country running training sessions and scouting players it still blows me away by how much talent there is. Many of the athletes have not had any formal training either. The goal is to open doors for young athletes, helping them get into college and play beyond.

Our other major goal is ‘generational change’ for gender equity. I cannot emphasise this enough. I know we have such a unique model for making a difference. I don’t see any other major sports organisation (or business organisation) out there that is looking to make this kind of change, placing gender equity at such a high priority, and using the model of working with the men to do so. I have such a strong belief that we need to change the beliefs, behaviors, and actions of men to make real change in society as a whole. My goal is to use this model of gender equity and work with others around the world so that we can make change in all of society.”

The women and girls’ teams are really strong in Karen FA – did that happen naturally or was it something you worked to create?

This is very intentional. The women and girls’ teams are the foundation of what we do. That is not to minimise anything that we do with the men and boys. As we move forward with the FA, we will be doing everything on an equal level. If the women get new uniforms, the men get new uniforms. If the men are entered in a tournament that we need to travel for, the women will get the same. If and when we are able to build a training facility, both teams will benefit from it. At some point in the future, if we are ever able to pay our athletes, every athlete will make the same amount of money. To me it is very simple. I work with incredible athletes. It does not matter to me if they are female or male. They are athletes, and they deserve, and will get the same opportunities through and through. No question.”

You’ve just been nominated for a prestigious MLS Works Community MVP award. How does that make you feel? Why would you like people to vote for you?

By voting for me you will be voting for true positive in gender equity and opportunity.”

What are your next steps for Karen FA? What ambitions do you have for the federation?

Some will tell you that I am a very ambitious person. I have big dreams and goals. Truly the next steps for the FA will be identifying our initial pool of players on the women and men’s teams. This is a big challenge for us as we have athletes spread around the world. We are starting in the United States and then will work on a process of identifying players beyond.

We will be working on connecting our athletes with colleges and professional scouts. We already have identified a number of players that we feel have a great opportunity to play at the next level.

I am hoping to connect with businesses and colleges to come and speak about the Karen FA and work on models to help organisations form a more gender equitable business model of their own.

The big goal I have is to be a part of forming the CONIFA Women’s World Football Cup and hopefully bring that to the United States at some point in the future. It would mean the world to me to host that event and showcase the athletes from around the world that are a part of the CONIFA family.”

To vote for Kyle in the MLS Works Community MVP award, go to https://mlsworkscmvp.com/

Original article can be viewed here